SUPPORTING Education FOR SUSTAINABILITY IN THE EARLY YEARS

Learn about what ‘sustainability’ means and how to embed it into your practice. We help you understand why establishing sustainable practices in the early years in important.

We do this by helping you: 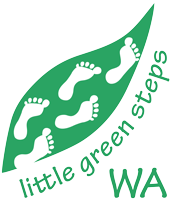 Little Green Steps is an initiative of the Gosford City and Wyong Shire Councils in New South Wales. In 2012 the Australian Association for Environmental Education WA Chapter was successful in gaining a Lotterywest grant to run a 12 month pilot of Little Green Steps, which began in July 2012. The Western Australian pilot directly supported sustainability learning and practice in three not-for-profit childcare centres, one each in the cities of Canning, Gosnells and Armadale. This pilot proved to be very successful.

During the ‘Pilot Phase’ there was a lot of interest shown from other educators who were facing similar challenges in implementing sustainability in their day to day learning. Because of this interest Little Green Steps ran 4.5 hour workshops in Perth and Albany. These workshops were very popular and very well received.

In 2014 LGSWA received another grant from Lotterywest to begin the implementation phase of the program. Little Green Steps WA (LGSWA) was officially launched during the year and now has a new look and logo. A new partnership with the City of Cockburn was formed as part of a trial with a local government focus where LGSWA ran specific workshops within the community. Connecting early years staff with local recourses to support them with meeting EYLF and NQS requirements is one of LGSWA’s main goals. This trial partnership has shown that working closely with your local government can prove to be very successful in obtaining this goal.